It’s about over, now. We live on a country road with several miles of wooded bottom lands behind our house. Last Thursday, some person decided to burn off a good portion of that area. It turns out it was a controlled burn, authorized by the Forestry Service (I have been told).

However, the morons involved did this burn while under a burning ban. Beginning on a day with 8 – 15 MPH unpredictable winds.

Most of us, who live out here, were very concerned because of course, we knew we were under a burning ban, and nobody warned us. They could have, for instance, put a simple sign up out on the roads and highways surrounding the fire, and pretty soon everyone would have known it was under control. Just three or four signs would have done the job. But I guess they never thought of that.

This smoke actually drifted into the nearest town, some six or seven miles away. It was a big freaking fire.

For three days, due to shifting winds, the smoke would move in at night. We woke up to this: 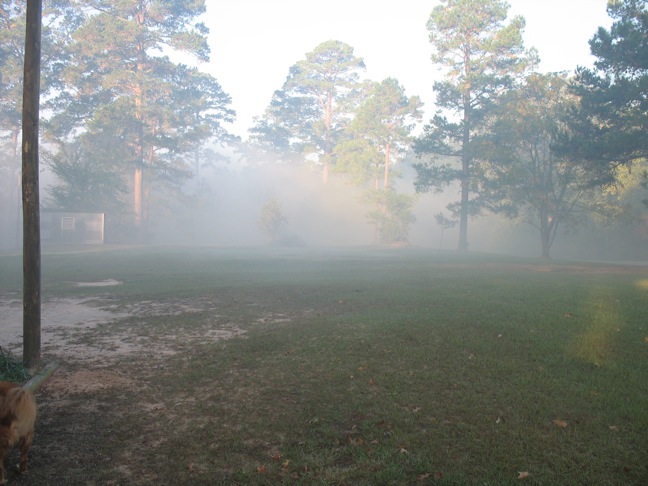 Folks, that is smoke – not fog. For three nights, sleeping was difficult. The smoke was in the house, and the stink lingered. A neighbor who has asthma had some issues, too.

It might have needed to be done; I wouldn’t know; but they sure could have handled it better. Notifications as mentioned above. Possibly burning smaller areas at one time. Advanced notice, to help those with medical problems.

This entry was posted in Current Events. Bookmark the permalink.