Mowing season has begun. Yesterday, I put $145.29 worth of parts (that includes purchase of a grease gun) on my Toro Titan Z5200, which looks like this: 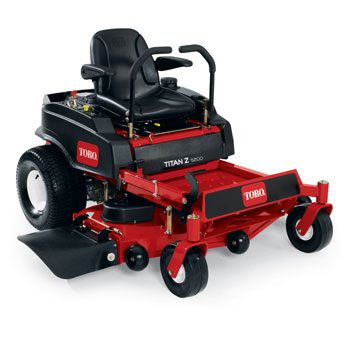 I changed the oil, oil filter, air filter, and put new blades on it. I disassembled all three anti-scalping wheels, greased them and reassembled them, and I greased everything that had a zerk fitting. I put air in the tires. In short, I did everything I could think of to get it ready for the season.

And then I mowed. I want you to know, other mowers may deliver a similar experience, but this is the best mower I’ve ever owned, and I’d buy another one if this one expired. Overall, I’ve been very happy with this mower. The Toro’s initial cost to me was $5123.

That’s not to say that it is without fault. It uses up about one idler sheave on the deck belt drive every year, at about $30 a pop – and don’t touch them right after they fail – it is really hot. I burned the sap out of my hand the first time one failed. And if you have a belt drive, you have to replace belts. It had one spindle fail, replaced under warranty. But this will be my fifth season with this mower, and I’m still happy with it. The deck is 10 gauge welded steel, and in five years I haven’t managed to dent it. The deflector is made from the same thing mud flaps are made of, and doesn’t seem to damage things.

Zero turn is the way to go. I used to mow with an ATV and a 5’ Swisher pull-behind mower; the Toro literally cut my mowing time in half, and does a better job. The hour-meter on the Toro tells me that I have mowed our two acres four seasons in 155 hours, so it’s about 39 hours per year.

Now, as to the cost of mowing: When the bahia grass starts popping up, I have to mow about every five to six days. This goes on from April through October. Besides routine maintenance, it burns a bit less than three gallons of gas per mowing. So I mow perhaps 35 times a year; so the cost of gas is around $4 x 2.5 gallons x 35 times = $350 in fuel. If the mower lasts ten years before I need to replace it, then my annual cost for it is $5123 / 10 / about $512 per year. So my annual cost to mow my yard is about $512 + $350 + $145 (parts) + $70 (anticipated idler sheave and new belt) all equals an estimated $1077 per year to keep my yard mowed. That is barring any major failures, like the engine or another spindle.

I suspect that buying a cheaper mower, which you would have to replace more often, would actually be less cost effective, but I don’t have the data to prove it.

This entry was posted in Current Events. Bookmark the permalink.