Yesterday, Texas Grandma, myself, and some friends decided to make a run up to the Tanger Mall in Forney, Texas, to do some shopping; and also drive on in to the edge of Dallas to a craft store the ladies like. So we made a small road trip up I-20 from the Longview area.

East Texas (well, most of Texas, really) has been in drought conditions and extremely hot weather for months. It’s so very dry, the trees are beginning to die. As we drove towards Dallas, we commented on the number of dead trees we were seeing, and the condition of the other trees. Many are shedding leaves now, a couple of months early, not because of fall, but because of lack of water.

Combine that with a very blustery day, with consistent strong winds and gusts up to 30 or 40 mph. 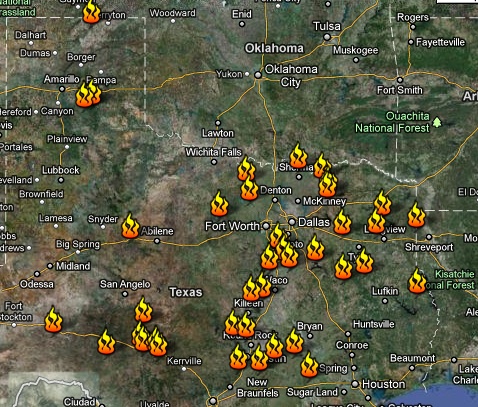 The link to the current version is here. Of course, it is constantly being updated.

So it was no surprise that there would be many fires in Texas yesterday. I believe the news story last night claimed there were 19 fires burning in Harrison County, alone. To put it all in perspective, here is a screen shot of KLTV channel 7 website this morning:

Link to KLTV here. You will notice that every story on this day is fire-related. Fox News carried the story nationally, here.

So we had finished our run in to Dallas and returned to the Tanger mall, when we got a text message from our son who lives in Longview. He advised us that a fire had broken out near I-20, near their home; that a mobile home park nearby was being evacuated; that I-20 was shut down at exit 599, and the bypass traffic was making movement impossible; and that they were packing and preparing to evacuate, if it turned out to be necessary. We found out later that this particular fire was caused by a high line sparking, and they also had a power failure for a couple of hours.

We had already noticed the eastbound traffic slowdown on I-20 even at Forney, which is 110 miles west of Longview. We had attributed it to the amazing number of LSU fans returning home. What with traffic being bogged down on I-20, we elected to skip over to Highway 80, and go home that way. This turned out to be a good idea, as we met zero congestion and clear roads all the way.

On the way home, we saw the smoke from several fires; as we drove through Gladewater traveling east, we first saw smoke to our right, between us and I-20, and then we saw a much larger fire to our left (the north side of Hwy 80). We knew that evacuations were probably going on at that time to our left, because it was a heavily wooded, heavily populated area, and the wind was bringing the fire directly towards the populated area, fast. This was the fire that took the lives of the mother and child in the KLTV story above.

It turns out that we made it home uneventfully, and traffic was no problem on Hwy 80. Our son’s family never had to evacuate, even though some of those near them had. He reported that you had to show ID to prove you lived in their area, to get back in. A small fire was reported a couple of miles to the east of our home, but it was put out quickly – they caught it before it spread.

Today, in Texas, if you start a fire outdoors for any reason, the cops won’t need to arrest you; your neighbors will take you out. The fire danger here is very real; I have never in my life seen it this dry, and the wind isn’t helping.

So my family is all OK. Thank the Good Lord for that, and pray for all those who are affected by the fires, and those who fight them.

Because today is forecast to be more of the same.

This entry was posted in Current Events, Stories. Bookmark the permalink.